All your dreams are about to come true.

Well, that is if all your dreams revolve around living in the horror movie of your choice because mine sure do! (No, I am not weird. You are weird for not wanting that.)

So that is why today we are going to talk about some places where our favorite horror movies were shot. While you will definitely feel joy when visiting these places, all the jump scares and demons are not guaranteed to be there still.

So let’s get started, shall we?

#1 The Stairs from The Exorcist. Yes, these are the same stairs where the Priest took a tumble. And yes, you can visit it if you like to recreate that iconic scene from the movie.

We are sad to tell you that you can’t actually visit the house that served as Regan’s home in The Exorcist since it is a private residence.

#2 Ettington Park Hotel from The Haunting of Hill House. This might be one of the most famous haunted house in all of history. The classic book by Shirley Jackson, The Haunting of Hill House, was based upon this house.

And then the exterior of the Ettington Park Hotel in Warwickshire, England was shown in the movie The Haunting.

#3 Timberline Lodge from The Shining. 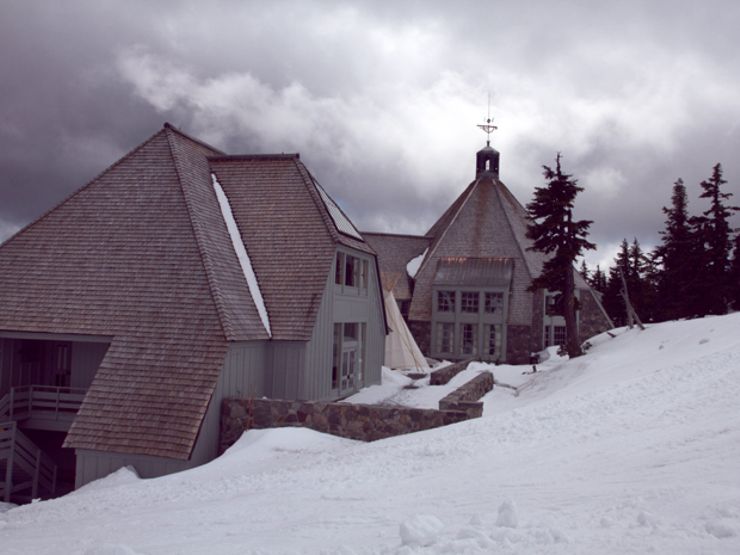 There was no way that we could make this list without mentioning the lodge where the infamous movie The Shining was filmed.

While the Stephen King novel, The Shining was based upon the Stanley Hotel in Colorado, Timberline Lodge in Oregon remains a very famous place for tourists to visit. You might know Villa Scott in Turin, Italy as the same featured in the classic Deep Red. The villa was actually a girls school run by nuns when the movie was filmed. However, it is now abandoned, so nobody truly knows what goes on down there. Dunsmuir House and Gardens located in Oakland, California might be one of the most used houses in the history of horror movies. I mean other than lending it’s exterior to Phantasm.

The house was also featured in 1976 Dan Curtis film Burnt Offerings, as well as in the classic movie So I Married an Axe Murderer and who could forget about the Roger Moore James Bond film A View to Kill. I am sure everybody knows the famous Michael Myers and the abode where he bloodied all those people. Yes, this is the original home of Michael Myers. Even though it does look a lot more cheerful nowadays and now serves as a place for different offices.

If you truly want to experience the horror of John Carpenter’s 1978 classic Halloween, you might want to visit the real size replica, The Myers House of the house one fans built in Hillsborough, North Carolina.

#7 Doheny Mansion from Drag Me to Hell. While not everyone was a big fan of the Sam Raimi’s 2009 Drag Me to Hell, you have to admit the location was top notch. So if you want to visit the place featured in the movie, you can do so by visiting Doheny Mansion in Beverly Hills.

#8 Point Reyes Lighthouse from The Fog. The John Carpenter’s classic 1980’s story The Fog was shot at the Point Reyes Station, California.

However, the most iconic location will always be the Point Reyes Lighthouse which is still there for the fans of the movies to visit and marvel at.

#9 The Union Center for the Arts from Prince of Darkness. This is quite a unique place because this is where the classic John Carpenter’s Prince of Darkness was filmed. And the fans of the movies got an exceptional treat because they got to see the actual movie exactly where it was filmed.

Hopefully they make this a tradition so everyone can enjoy the cult classic in the LA Artcore Union Center for the Arts.

This place was actually a Japanese Union Church in LA when it was featured as the church that portrayed Saint Godard’s in Prince of Darkness. Does this really need any kind of introduction? This even beats the Dunsmuir house in the most horror movies featured. You see, Oakley Court Hotel in Berkshire, England was featured in countless horror movies, one after another.

These include The Reptile, Curse of Frankenstein, Nightmare, Die, Monster, Die!, And Now the Screaming Starts!, and The Rocky Horror Picture Show. So any real horror movie fans will undoubtedly love this place.

Have you already visited some of these places or do you want to do that in the future? Which one of the horror movies featured on the list is your favorite? Comment on below and let us know!